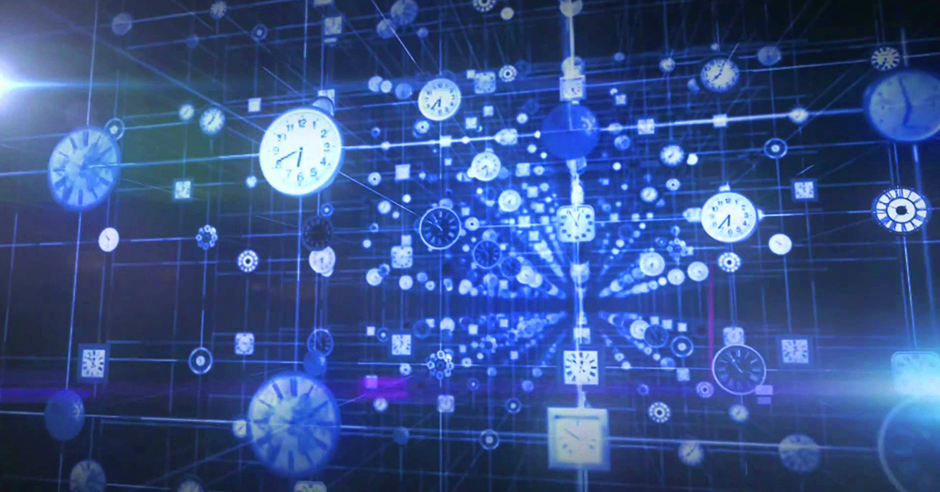 1.0154 Everything that IS ALREADY EXISTS and IS for the good. The essence of this statement is that all the diversity of types of Collective Cosmic Intelligences and corresponding Self-Consciousnesses Forms ALREADY initially ARE and were specifically manifested at once in entire synthetic slloogrentness (as dimensional diapasons) of Energy-Plasma for one nominal Instant of Eternity. Simply speaking, all multidimensional Forms of the Macrocosmos were objectively manifested — each Configuration on its unique Level of Energy-Plasma — simultaneously and in a single moment, and there was not any sequence or duration in This integral Cosmic Act — various versions of this Illusion are manifested as structural characteristics of Self-Consciousnesses Forms. The Instant of Eternity has nothing in common with that which you understand by Time, because it does not have any inherent features of inertia. However, due to the Mechanism of slloogrentness typical of all Energy-Plasma structures (both of Energy and of Information), all self-conscious Elements that structure One Instant of Eternity, can become infinitely «extended» («unfolded,» «be unpacked») through the Universal Focus of Self-Consciousness in individual systems of subjective Perception, as well as become infinitely «condensed» («folded,» «archived»). These effects result from the manifestation of functions of zero ingredients of dimension.

1.0155 The state of simultaneous-instantaneous Existence of absolutely all Self-Consciousnesses Forms is organized in such a way that higher-frequency versions of your more objective «future» — through UU-VVU-projections of the collective Subconsciousness — provide information for all the diversity of possible versions of your subjective «present,» which, in turn, is also based on your empirical Experience «projected» into your Focus Dynamics from the subjective «past.» This occurs due to the simultaneous Creative Activity of two different-vector Impulses in the Focus Dynamics — the irrkoglictive Impulse (it provides qualitative disintegration) and the eglleroliftive Impulse (it initiates integration tendencies). Inertial refocusings of the Form-Creators of your Self-Consciousnesses Forms into these subjective categories of your «personalized» Existence («the past» and «the future») are carried out by means of the universal state of the Focus Dynamics which you subjectively interpret as «now»; the energoinformational Essence of this state represents the multiple-vector (qualitatively multipolarized) resonational point of Space-Time that allows the Form-Creators of different-qualitative «parts» of the Self-Consciousness’ Focus Dynamics (with the help of UU-VVU-conglomerates) to be simultaneously «reprojected» into NUU-VVU-Configuration in the most corresponding dimensional resopasons.

1.0156 The fundamental difference between those who perceive themselves as living in the beginning of the third millennium, and those who really perceive themselves as living, suppose, «in the epoch of Atlantis» is based just on a very specific frequency of Self-Consciousness Configurations of their realizational Forms; it is unique both for «us here» and for «them there» and it limits the possibilities of creative dynamics of «our» and «their» refocusings to strictly-definite ranges of force-type interactions. The Continuums that are structured by «our» NUU-VVU, and the ones that are structured by specific Configurations of «their» Self-Consciousnesses — all of THEM (as well as a lot of other things that are «historically» separated from «them» and from «us» by «millennia or millions of years in the past» and «millennia or millions of years in the future») are in one and inimitable (for our common Collective Intelligence) «NOW,» where «we» (and «they») can intentionally refocus from «our (their) own» inertial moments of «now» when we acquire certain skills and necessary Configurations of Forms in order to have creative realizations through the Information that corresponds to the quality of SFUURMM-Forms in the Focus Dynamics expressed by us.

1.0157 Virtually the whole slloogrent Mechanism of the Focus Dynamics represents a universal state of Form-Creators which I define as the zero ingredient of dimension. This state provides the Space-Time Levels under consideration with the manifestation of such important properties as self-refractability, «self-projection» (or the principle of «projecting projections»), self-folding ability (stempolar archiving), and multiple directions (multipolarization) of the Focus Dynamics of an infinite set of resonationally-aggregated (composed) energoinformational structures that provide all manifestation Forms of space-time Entities with a very high «local flexibility,» «multiple-direction interpenetrability» (birvulyarity), «elasticity,» «expansibility,» «compression,» and «mutual twisting» (for example, the formation of the illusion of «the past,» «the present,» and «the future»). The higher the dimension of Space-Time, the less the subjective difference between «external» (form-shaping) and «internal» (psycho-mental) states of the Self-Consciousness — the former cab be easily transformed into the latter, and the latter can be easily transformed into the former or into a certain third, fourth… tenth qualitative state that represents the main feature for the Form’s manifestation in a certain section of the general slloogrentness of Space-Time.

1.0158 The State of instantaneous-simultaneous manifestation of any processes in the multidimensional slloogrent structure of the Macrocosmos includes an infinite set of subjectively inaccessible (for an observer) features and characteristics of «the outer reality» that are beyond the functional mechanisms of the observer’s Perception system: you cannot see, feel, and experience all the infinite diversity of simultaneously existing versions of Forms manifested in your Self-Consciousness only through the tiniest part of their typical slloogrent Configurations. This State implies the eternally-potential presence (in the general structure of Energy-Plasma) of all possible synthetic processes and Self-Consciousnesses Forms propagated in different-qualitative Time Flows; and these Forms structure more (and less) harmonious states (including synthesized ones) of «the outer reality» subjectively perceived by you, and their Configurations simultaneously-instantaneously include both «the previous» and «the future» Experience of Existence.

1.0159 This State also provides any Self-Consciousness Form with a potential or actual possibility to subjectively perceive, at every moment, many versions of possible development scenarios «separated» by various inertial periods. The State implies the presence of the so-called «beyond-time mode of perception» with one distinctive feature: the difference in the quality and in the level of differentiation (detailing) of everything that happens during the instantaneous-simultaneous perception leads to specific (in each particular case) choices and to the formation of various qualitative Directions or individual rotation Cycles in the Self-Consciousness’ development scenarios.

1.0160 Owing to the principle of instantaneousness-simultaneity, «every» rotation Shift happens just one-and-only time — in One Moment of Eternity! Everything that each of you implies by the subjective notion «my personal Life» is never repeated anywhere, because — simultaneously and at once! — it occurs everywhere at once and «instantaneously,» that is, in the same «multidimensional moment» subjectively «extended» in the Perception structures of your Self-Consciousness to «billions of years» of incessant Existence.

1.0161 Due to the Principle of slloogrentness of Everything, any seemingly «independent» (discrete) rotation Shift that occurs inertially in the Self-Consciousness of any Form is actually just a natural part («a particular case») of one, much more complex and multifaceted Rotation Shift in the entire multidimensionality of energoinformational structures of the Universal DDIIUYYI-Entity. In other words, there is just one-and-only slloogrent Shift (relative to the State of Information before It becomes Energy-Information) multidimensionally manifested in Energy-Plasma, which is initially fulfilled on the Higher manifestation Level of Collective Cosmic Intelligences within the DDIIUYYI-Entity*, while each Self-Consciousness Form in its manifestation resopason — through its typical Focus Dynamics — subjectively distorts the slloogrent Energy-Information of this single-moment Universal Shift, being in a special state — in the Illusion of Inertia associated with Existence of All. Moreover, it does not matter whether this is subjectively experienced (happens) as «a hundred thousand years ago» or as «a hundred thousand years in the future,» «on Earth» or in «another Galaxy» — all these inertial manifestations are just facets of one Universal qualitative Shift that occurs inertially in the entire multidimensionality of the eternal «now.»

1.0162 It is very important to understand that the State of instantaneousness of the Focus Dynamics of all Self-Consciousnesses Forms, whose Configurations structure all Levels of the Macrocosmos, has nothing in common with your subjective Conceptions about «one moment of Life» particularly associated with the life span of your own «personalities» or any other Self-Consciousnesses Forms in your outer reality. This Cosmic Principle is an objective manifestation (in the entire slloogrentness), in one noo-time Instant of Eternity, of the whole infinite set of Configurations ’ versions associated with all parts of the already-completely-synthesized — for that Instant! — state of Energy-Plasma; that is, it is a kind of integral perception of Time experienced in the beyond-time manifestation mode by all Your Self-Consciousnesses Forms on all Energy-Plasma Levels. There is no sense in associating your subjective «personalized» Perception with the Principle of instantaneousness, because any type and level of subjectiveness (including chronological properties of Time) is formed and reflected in the Space around you through the individual Configuration of your Self-Consciousness Form, that is, through the quality of your current Focus Dynamics.

1.0163 In each Perception system that comprises different levels, «the single-moment dynamics» of One Moment of Eternity are always subjectively interpreted only in a unique way, because the Macrocosmos simply does not exist in the form which you imagine now, instead, there is just a slloogrent «infinite-pinpoint» state of Energy-Plasma, where each resonational state of a Self-Consciousness Focus corresponds to a strictly-definite subjective Conception of «instantaneousness» of Existence. Instantaneousness has nothing in common with that which you interpret as «historical periods,» «dying,» «destruction,» «disappearance,» and so on — all these effects of Time and Space are just derivatives of the Form-Creators’ Focus Dynamics modeled by the inertial state of your individual Perception systems. The State of instantaneousness or the Instant of Eternity can be experienced objectively only by Those You Who are the Higher Cosmic Intelligences or the Creators on the Higher Levels of the Macrocosmos.